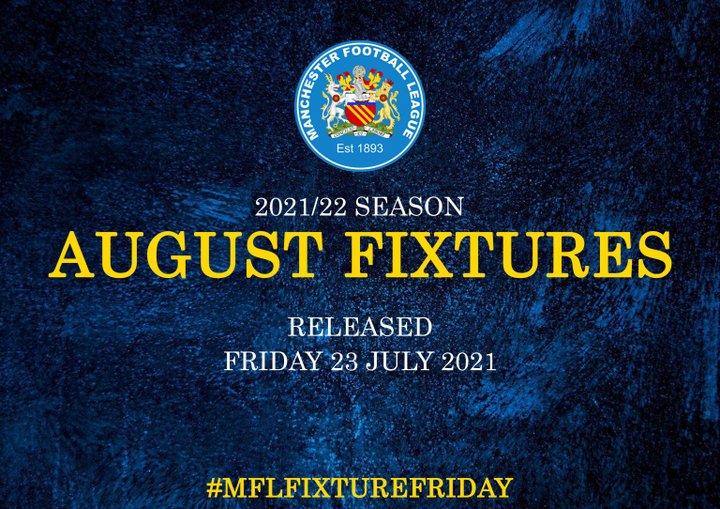 We can now reveal the August fixtures for the upcoming season.

Once the North West Counties Football League release their fixtures we will then be able to finalise and confirm ours. This is due to there being Clubs that have teams in both leagues i.e. Avro, Chadderton and Daisy Hill.

The Premier Division, Division One and Division Two kick off their campaign on Saturday 7th August while Divisions Three, Four and Five begin theirs on Saturday 28th August.

Premier Division
Hindsford, who were the last team to lift the Premier Division trophy, kick off their 2021/22 campaign with a visit to Radcliffe Road where they face Bolton County. Beechfield United welcome Chadderton Reserves to Salford Sports Village for their opener.

Old Alts take on Heyside at Crossford Bridge and Royton Town host Dukinfield Town at their new home of the Vestacare Stadium.

Division One
Murray Trophy finalists East Manchester travel to Blessed Thomas Holford to face Altrincham Hale as the race for promotion to the top flight begins in Division One.

Wilmslow Albion welcome Uppermill to Oakwood Farm for their opener while Tintwistle Athletic go to Elton Vale. Butler Park is where Atherton Town and Moorside Rangers will kick off their season and Bolton Lads and Girls host Govan Athletic at Hacken Lane

Division Two
We have four new teams and one team returning for the 2021/22 season.

Two of the new teams face each other on the opening day as AFC Burnley host Bolton Borough at Scholes Park. Daisy Hill Development travel to Gin Pit Fields to take on Astley and Tyldesley and Hollinwood host Avenue at Oasis Academy for their first taste of MFL action. Returning to the MFL are Manchester Central who host Leigh Genesis.

Division Three
The reserve teams in Divisions Three, Four and Five kick off their season a little later than those in the top three divisions.

The last winners of the division, Uppermill Res begin their campaign with a trip to Elton Vale Res who were runners up in the same season.

Springhead Res will kick off their season with a trip to Butler Park to face Atherton Town Res.

Division Four
Beechfield United A host AFC Monton Res at Salford Sports Village in a local derby to kick off their campaigns.

Division Five
We welcome back Chadderton EDS to the MFL after a brief period of absence and they begin their return at home to Hollinwood Res.

Astley and Tyldesley Res host Dukinfield Town Dev at Gin Pit Fields to round off the opening fixtures.

NB - Fixtures are subject to change.

 2021/22 Promotion and Relegation Please see below the ups and downs planned for the upcoming season.

Registrations  Please see below the notice with regards to registrations for the upcoming season.