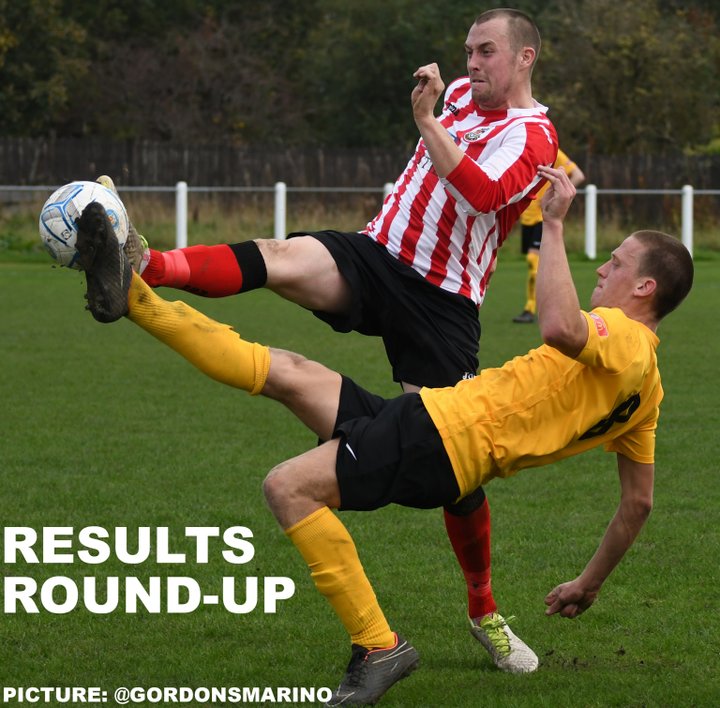 We take a look at the results from across the Manchester Football League and our teams who were in cup action in their respective County competitions.

Premier Division
It was third against first on Saturday as Rochdale Sacred Heart welcomed Hindsford to Fox Park in a game that played its part in an eventful day at the top of the table. It was the hosts who bounced back from defeat to topple the league leaders as they ran out 4-2 winners. Michael Kearney, Lewis Greaves, Owen Whitehead and Jack Holt were all on the score sheet for Hearts, inflicting The Tonics’ second straight defeat after previously being unbeaten.

Stockport Georgians moved up two places following their 3-1 win at home to Chadderton Reserves. Jordan Anderson, Leon Murphy and Callum Campbell all scored second half goals to seal the win for the hosts, seeing them come from behind at Cromley Road.

Manchester Gregorians cruised to a 5-0 win over Dukinfield Town to move them up to fifth spot, level points with fourth place and having a game in hand.

In the day’s other game, Walshaw Sports and Springhead shared four goals and the spoils as they played out a 2-2 draw.

Division One
With league leaders Heywood St James not in action this weekend, second-placed Pennington had the opportunity to replace them and that they did with 5-1 win over Radcliffe Juniors. Daryl Cope scored two penalties as part of his hat-trick with other goals coming from Ross Farrington and Conrad Stanistreet, putting his side two points clear at the top.

Elton Vale lost ground on the top two teams as they fell to a 2-1 defeat at the hand of Atherton Town. Mark Severs’ goal proved not to be enough as Danny Kerr’s double sealed the points for the visitors to move them up two places to sixth.

Uppermill moved up to fifth spot in style with a 7-0 win over Wilmslow Albion at Churchill Playing Fields. Tom Simpson netted four of the goals, the others coming from Aiden Stevenson (2) and Josh Barlow in a flawless performance.

Tintwistle Athletic enjoyed a 7-3 win over Atherton LR Reserves as they move up tenth, leaving LR rooted to the bottom. Josh Stevenson scored four of them and Joe Elliott, Barry Lawson and James Wilson getting the rest for Tinny who have now won their last three.

Altrincham Hale remain in fourth spot despite them picking up three points from their fixture with Bolton Lads & Girls. Matthew Lamb and Jack Yates scored first half goals to give them a 2-1 lead at the break and Andrew Nugent added a third to seal a 3-1 win.

Govan Athletic and Leigh Athletic played out a 3-3 draw at Platt Lane in the Division’s other game of the day.

Division Two
It was first versus third as Hindsford Res hosted Middleton Colts and both teams played their part in a cracker of a tie. Seven goals were scored with the visitors edging it by the odd one, winning 4-3 at Squires Lane. Ryan Burgess, Lewis Byrne, Steve Cass and Jamie Diamond all scored to move them to within 2 points of the summit with a game in hand.

Irlam Steel took advantage of Hindsford’s slip-up but not in the way they would have liked as they could only manage to draw 1-1 with Rochdale Sacred Heart Res. The point takes Steel to the top but by goal difference.

Atherton Town Res moved up to fourth place after they picked up a 2-1 win over Walshaw Sports Res. Benjamin Hyde netted both for Town, leaving Walshaw in tenth.

Wright Robinson was the venue where Hollinwood and Manchester Gregorians Res played out a 2-2 draw.

Division Three
Dukinfield Town Res maintained their place on top of the pile after they cruised to a 6-0 win over Old Alts Res. Peter Susca and Dan Towey scored two goals apiece plus further goals from Sean O’Mara and Augustine Yarwood finished off the rout.

Uppermill Res kept the pressure on and remain two points behind as they left Radcliffe Road with all three points. Tom Helsby, Tom Higgs and Danny Hill were on target for the hosts but Sam Royle, Matt Barlow and Dylan Fitzgerald all scored twice for Uppermill, Steve Walton got the other.

Elton Vale Res made it three wins for the top three after they left Firgrove Playing Fields with a vital three points. Peter Hickford, Ben Plimley and Ellis Ramlaul all netted for Vale in the 3-1 win while Brandon Byers-Wilkes got Rochdale Sacred Heart A’s consolation.

East Manchester Academy join three other teams on 13 points as they move up to fifth spot following their 4-1 win at Leigh Athletic Res. Eddie Lamb (2) and James Shepherd got East's goals as they bounce back from defeat.

Pennington Res registered an impressive 7-2 away win against Wilmslow Albion Res to move up a place to eighth.

Moorside Rangers Res were held to a 2-2 draw at home by Govan Athletic Res after trailing 1-0 at the break. Paul Parker and an own goal were the scorers for the hosts while Sam Roberts and a last-minute equaliser from David Roddy ensure they left with a point.

Atherton Town A left Astley Sports College with all three points in their tie with Dukinfield Town A. Ashley Mayors was on the score sheet for the hosts but Rob Graham and Dylan Jeffs both scored for Atherton.

Open Trophy
In the only cup tie of the day Heyside Res progressed through to first round proper in emphatic style as they won 14-2 against Tintwistle Athletic Res. The goal scorers for the hosts were Mark Pyatt (4), Jordan Hindley (3), Dominic Hallam (2), Carl Beamish, Sam Beckett, Ryan Gibson and Michael Shepherd while Jake Knowles and Michael Pancaro both netted for Tinny.

Manchester Challenge Trophy[b][/b]
Heyside booked their place in the semi final after they brushed aside Boothstown at Bridgewater Park. Nathan Lamb and Jordan Schofield scored first half goals before Lamb got a second then Gareth Hill rounded off the scoring to seal a 4-1 victory.

Manchester Central bow out at the quarter final stage as they lost 2-1 at home to Egerton. All the goals were scored in the first half at The Manchester College, the visitors took an early lead, a lead which they doubled after 15 minutes but despite Daniel Burns’ penalty midway through the half, Central were unable to claw it back.

It was an eventful afternoon at Wright Robinson where East Manchester entertained Beechfield United and it produced a cracker between the two MFL sides. Beechfield enjoyed the first half and held a 3-0 lead at the break thanks to goals from Jordan Jones Waite, Jamie Sinnott and Gareth Mooney but were reduced to nine men and the hosts forced it to a penalty shoot-out thanks to a Max Perry double and Danny Williams strike. East eventually progressed to the last four after coming out on top on penalties, winning 5-4.

It remained goalless after 90 minutes at The Vestacare Stadium as Avro Res hosted Abacus Media. The Lancashire & Cheshire League side put their name in the hat for the Semi Final after winning 3-1 on penalties to deny the MFL side.

Stockport Senior Cup
There were goals galore at Crossford Bridge where Old Alts hosted Cheadle Town Res in a game that had 10 goals and a penalty shoot-out. The tie finished all square after ninety minutes as they played out a 5-5 draw but the MFL side lost out on spot kicks as the visitors progressed with a 5-4 success.

Stockport Georgians Res put their name in the hat for the second round thanks to Joe Cash and Jack Pogson goals, giving them a 2-1 win away to Stoconians Res.

 Results Round-Up - 03.11.18 The clocks may have gone back last weekend but the Manchester Football League continues to move forward as we look at the first round of results from November.